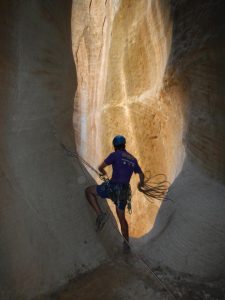 Joe Moerschbaecher and Jeff Heveron of Pura Vida Adventures just completed a two week recreational canyoneering trip in Zion National Park.  The trip concluded with the 2012 American Canyoneering  Academy Zion Rendezvous.  During the trip we did a lot of canyons, made a lot of new friends, and reunited with old friends.
The trip started with Keyhole Canyon a short class B canyon, which was a good way to literally get our feet and bodies wet for the weeks to come.  The following day we did Pine Creek a Zion Classic as well as Jolly Gulch a lesser known canyon in Zion which is 2 hours in length but has a phenomenal 160 ft. rappel to enter the canyon.
Legend has it that a local resident named Jolly got drunk one night went mad  and threw his entire family off the cliff before jumping off the cliff himself.  We passed by the house of Jolly on the approach to the canyon.  This would be a great canyon to do on Halloween night, if you dared.

The next day we did Birch Hollow a popular canyon just outside the park with phenomenal slots similar to what you see in Zion itself.  Later during the trip we would do Mystery, Spry, Pine Creek a second time and Behunien.  Behunien was by far the highlight of the trip.  Behunien Canyon is a Zion classic.  The Canyon has a long approach with significant  elevation gain before dropping down into the canyon and walking an additional 45 minutes to the first rappel.  Behunien has multiple rappels of 150ft. or more in length.  It is quite unique from many of Zion’s other classic canyons.  The Canyon culminates above the Emerald pools with a two tiered rappel.  The second of these two rappels is approximately 170ft. in length.  Behunien was quite an exhilarating canyon.  Its long approach and long rappels, as well as it being personally our first descent down it was by far the most interesting canyon of the trip. 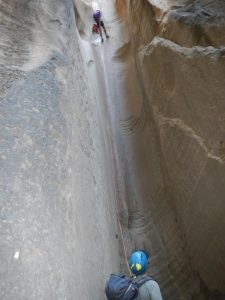 Birch Hollow canyon one of its many rappels

Although many of the canyons we did I had done before the thrill of those canyons did not disappoint.  It was also great to take some time to kick back and catch up with old friends and meet new friends at the Rendezvous.  Thanks to Zion Brewing Company for sponsoring the beer.  To all are canyoneering friends: Rich Carlson, John Wood, Phoenix Crew, Sedona Crew, Salt Lake City Crew, New York Crew, and the rest of the group we look forward to seeing you next year. Be safe, have fun, and I hope there are many canyons in your future between now and next year. 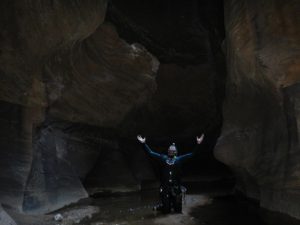