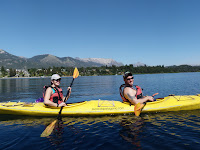 The Beginning of our expedition
Pura Vida Adventures began a 10 day Patagonia Expedition with clients Tom and Danielle Saunders on Dec 15th. The first portion of this trip was a 4 day 3 night paddle on Lake Nahuel Huapi. Nahuel Huapi is the largest and most popular of the glacial lakes in the Patagonia Lakes District. It borders the town of San Carlos de Bariloche and legend has it if you drink out of the waters of Nahuel Huapi you will return to Patagonia. This legendary and mythical lake was our home for the first 4 days of our Patagonia Expedition.
Day 1: We departed from Playa Serena with little wind and clear skies as we made our way around the San Pedro Peninsula we began to feel the wind and paddle through some 2 ft swells in the open waters. After completeing the crossing to the other side of the lake we stopped for lunch and enjoyed the sunny calm weather of the day. The afternoon consisted of many more hours of paddling along the shores of Victoria Island where we saw beautiful rock outcroppings with birds nestled in the rocks and flying around the island shore. We made camp that night on the island about .5 km north of Piedra Blanca Port. After enjoying a full dinner we all made our way to bed tired from the days paddle and preparing to get well rested for another day of adventure.
Day2: Day 2 started with sunny skies and calm waters just like the day before. We continued to paddle north along the east side of Victoria Island where we stopped for lunch at the Northern end of the island. The sky became hazey with ash as from the recently erupted and still smoking Volcano Peyehue just across the border in Chile. During our first two days of paddling we saw small rocks which were actually volcanic ash floating in the lake. 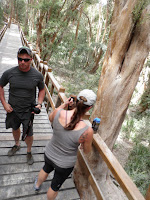 Hanging out in Arrayanes Forest
At lunch we began to feel the power of the infamous Patagonia winds as the northern wind began to pick up and caused us to extend our lunch break for another 2 hours. After lunch we would make a short open water crossing to visit the Arrayanes Forest outside the town of Villa La Angostura on the tip of the Quetrihue Peninsula.
As the wind calmed down we made the crossing North to the Peninsula and Arrayanes Forest. The Arrayanes tree is endangered and this forest is the only one that still exists in the world. The tree is unique because the trees grow out from one another and as a branch breaks of it can generate into a new tree over time. Many of the trees in the forest are hundreds of years old as the trees grow only 1 cm per year. As we walked through the forest we were all amazed and fascinated with this unique forest. After stretching our legs while walking through the forest and enjoying a much needed break we got back in our kayaks to find a campsite on the western shore of Nahuel Huapi. The Northern wind we had faced earlier in the day was still blowing strong but would now be of assistance as it would provide a tailwind in our travels. 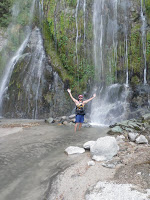 Waterfall during the trip

Southwest we travelled from the Arrayanes forest making incredible time as we travelled with the wind at our back and surfing 3-4 foot swells. Camp that night was set under clear skies where the Coluco River met Nahuel Huapi Lake. We fell asleep staring at the bright southern stars that created constellations such as Orion and the Southern Cross.
Day 3
Day 3 started with us awaking to an even stronger northern wind continuing to blow. The wind was so strong that even though it blew in our direction of travel the morning hours were spent on shore waiting for the winds to slow and waves to calm. During this time we took a hike up the Coluco River jumping from boulder to boulder as we made our way up the river taking in the beauty of its waterfalls and the giant trees which surrounded its banks. 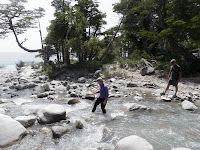 Hiking along the Coluco River
Upon returning to camp along the lake’s shore we were happy to see the winds had seceded a bit. Not wanting to lose this window of opportunity to travel we had a quick bite and enjoyed the beautiful weather and a nice northerly wind which assisted us as we made our way south toward the Blest and Tristeza Rivers. As we rounded the Peninsula and began to head west toward the rivers’ ports we were blasted with a tremendous head wind. As we made our way around the Peninsula the wind had a sudden shift now blowing due east. This quickly became a problem as we headed west with our head down we fought the 4-5 foot swells and slowly moved west north west . We wanted to get to the land to our north but had to be careful not to expose the entire side of the boat to the east blowing wind gusts. Slowly, we fought the winds andd made it to shore where we warmed up with some coffee and waited for the wind to provide us with another opportunity to travel toward our west south west destination.
An hour later the winds seemed manageable Tom and Danielle were getting much more comfortable in the kayak and we all felt that although there were still decent size swells the size had gone down since earlier when we were forced to go to shore.
The next 2 hours were spent battling the wind and waves in the area of the lake known as the cocktail where the Blest and Tristeza Branches meet the Nahuel Huapi. Bows of the kayaks rising up high and water splashing into our faces we made it to shore only a half mile from the next days pick up point at Arroyo Angostura where Nahuel Huapi flows into Moreno Lake.
As we got out of our kayaks and pulled them ashore we boiled water and got into warm clothes. The sky showed a storm in our future and and we quickly set up tents and made camp. While eating dinner we were pleased to see the skies clearing a bit but were still preparing for a long rainy night after a hard day of paddling. We went to bed wondering if the rain would come and bring more winds with it. 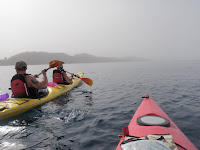 The next morning we awoke pleased to see that the skies had cleared and winds had calmed. We paddled the last half mile where we enjoyed the sun and got some final photos before getting picked up and heading back into town.
The paddling expedition was a great success we experienced two days of sun and little wind but on day 3 Danielle and Tom got to experience the volatile weather and infamous winds that make Patagonia so unique. Patience and sound judgement made for a successful paddling expedition when the Patagonia winds came in.
joe2012-01-05T17:15:26+00:00January 5th, 2012|adventure travel|